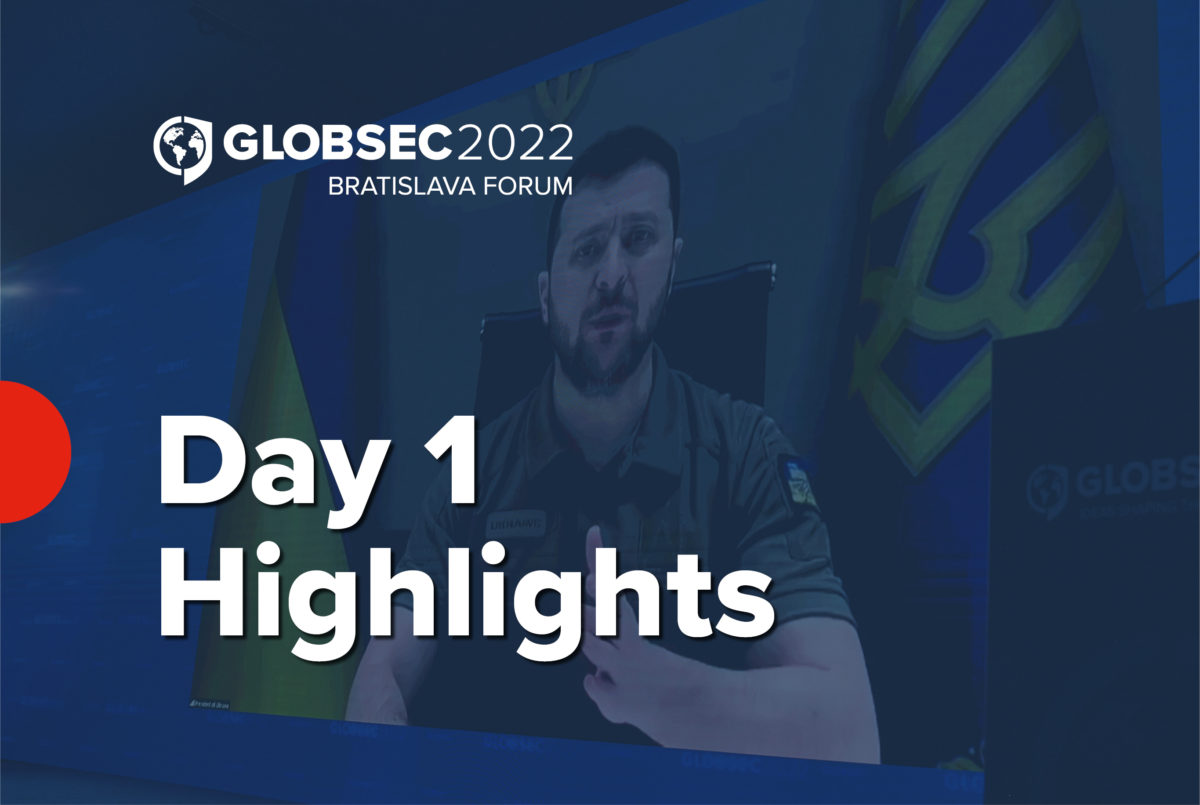 Here’s a quick digest of the highlights:

Except for president Zelenskyy, other Ukrainian leaders addressed the audience.

Deputy PM for European and Euro-Atlantic Integration of Ukraine, Olha Stefanishyna, in her conversation mentioned, the war in Ukraine opens the door towards new future. She also said: “It is not in Ukraine’s interests to become a member of the EU very fast, because we want to become a competitive member of the EU.”

Anton Korynevych, Ambassador-at-Large, Ministry of Foreign Affairs of Ukraine discussed the actions of International Tribunal for Ukraine, which officially began investigations into the acts perpetuated by Russian troops in March. “Committing of war crimes is part of Russian war strategy. Destroying everything is a way of Russian warfare. To establish a chain of command is important to find out who was responsible for committing thousands of crimes,“ he said.

Dmytro Kuleba, Minister of Foreign Affairs of Ukraine, via his video address argued for more NATOs style weapons to push Russians back. “Russia must not win, Ukraine must not lose,” he said and added: “Russia wants to physically destroy Ukraine and kill as many Ukrainians as possible. We need to push Russia to failure.”

Casper Klynge, Vice President for European Government Affairs of Microsoft lead a separate discussion on the EU initiatives in the digital era. “Instead of fighting the regulation, we are in the moment to act together and align whether in the EU, India or North America,“ he said.

In a panel on regulating tech, Veronika Remišová, Deputy Prime Minister and Minister of Investments, Regional Development and Informatization of the Slovak Republic, said: “We should not ask if regulating Global Tech is realistic. At this point, we don’t have a choice anymore.“ She further reiterated that Slovakia is especially vulnerable to Russian propaganda, and in order to fight Russian propaganda, she mentioned the importance of the government’s actions in the field of cybersecurity.

Strategic cooperation in the region

In a discussion on the strategic partnerships for the future, President of the Republic of Serbia, Aleksandar Vucic said: “you cannot survive without gas, we were always 100% dependent on Russian gas.” He further added, that “there are a few countries that refuse to use Russian gas, they are reversing and paying extra to other countries, but still using Russian gas.”

In a panel titled War in Ukraine – Europe’s Destiny at Stakes?, three foreign ministers discussed the impact of the conflict on the regional geopolitics. Minister of Foreign and European Affairs of the Slovak Republic, Ivan Korčok said: “Thank you Mr Putin. Unthinkable is happening – with Sweden and Finland joining the NATO, the European landscape and political map are dramatically changing.” Alexander Schallenberg, Federal Minister for European and International Affairs of the Republic of Austria, said: “We have an extremely Europe-centric way of thinking – we have to broaden our vision geopolitically. There will be no return to the status quo.”

Three prime ministers also discussed the security of the EU’s Eastern Boarder. Eduard Heger, Prime Minister of the Slovak Republic, said: “we lived too long in our comfort zone – now the crisis came and nothing can be taken for granted … it is a wake up call.” Prime Minister of the Republic of Bulgaria, Kiril Petkov stressed that they offered Ukraine to repair 80 tanks and provided striking military power. “In terms of net practical effect we’ve done a good job,” he concluded. Prime Minister of the Republic of Latvia, Krišjānis Kariņš said: “Putin understands power and he mocks weakness- all will end when he loses.”

Maroš Šefčovič, Vice-President of the European Commission for Interinstitutional Relations and Foresight, in the panel on EU’s addiction to Russian oil and gas, labelled new EU sanctions as „significant and unprecedented.“ He stressed that the EU is respecting the difference of opinions and that „the unity is the most precious currency“ even if more days are needed to hammer out details of sanctions.

In a panel on “Unleashing Stronger Global Economy Post-Invasion”, the speakers agreed the Russian sanctions are simultaneously pushing the issues of energy security and the green transition to the forefront. The regionalization of the global economy has a lot of opportunities and challenges for CEE countries, and they need to be carefully analyzed.

GYLF 2022 GLOBSEC2022 Young Leader Forum kicked-off with a keynote speech from Casper Klynge, Vice President for European Government Affairs at Microsoft. He highlighted the value of private-public cooperation in shaping policies of the future, and the importance of supporting and engaging with young leaders.