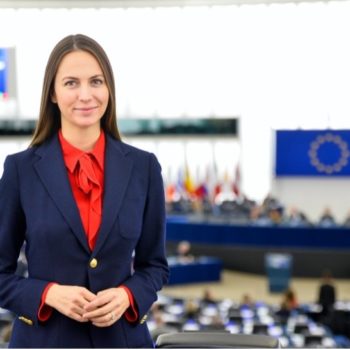 MEMBER OF THE EUROPEAN PARLIAMENT AND INITIATOR OF REGULATION 4 INNOVATION

Eva Maydell is a Member of the European Parliament leading the work on important digital legislation such as semiconductors and Artificial Intelligence. MEP Maydell is the EPP Group Rapporteur on the Chips Act and the rapporteur on the Chips Joint Undertaking, a massive new planned EU public-private partnership for microchips. MEP Maydell is also the lead rapporteur in the Industry Committee on the AI Act, the first-ever general law on Artificial Intelligence.

Maydell´s policy priorities include innovation and the use of new technologies, supporting entrepreneurs and sustainable investments in Europe, and enhancing access to quality education. She is among the most active members of the EP. Currently, she is the EPP Group NIS 2 Directive on cybersecurity. She was also the EPP Group rapporteur on the Digital Services Act and Digital Markets Act in the ECON committee. She was the main Parliament rapporteur on the Regulation on charges on cross-border payments as well as worked on several legislative files, part of the Digital Single Market Strategy.

In the European Parliament, Maydell is Vice-Chair of the Delegation for Relations with Japan as well as part of the Delegation for relations with the US. is Maydell is also President of the European Movement International, the largest organisation of associations and civil societies in Europe. She is a Board Member for World Economic Forum’s Digital Europe program and a member of the WEF Global Future Council of Europe.

Eva has been awarded the European Parliament’s MEP of the Year Award twice. She has also been included in FT’s own ‘New Europe 100’ ranking of CEE’s emerging change-makers, European Forbes’ 30 Under 30 list and others. She has also been featured in POLITICO’s 40 most influential MEPs and “POLITICO 28” list of people who shape Europe and POLITICO’s 2018 Women who shape Brussels.