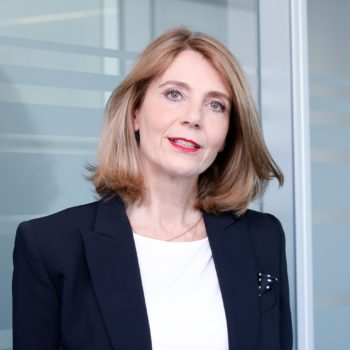 Gabriele started her career in the pharmaceutical industry almost 30 years ago. She joined MSD in Austria in 1995 and served in different marketing & sales positions before moving 2004 to our global marketing organization in the US. Returning to Europe in 2007, Gabi became the Managing Director of MSD Hungary based in Budapest and lead the subsidiary through challenging times of health care reforms. After a strategic re-orientation with a lot of focus on creating access solutions, the growth momentum of the organization had been regained.

After her return to Austria in 2009, Gabi led the local Austrian MSD organization as Managing Director. With her proven leadership skills, she guided the organization successfully through the merger with Schering-Plough making Austria the first market to integrate legal entities. Her focus on a culture that enables results made MSD Austria rise in rank from the number 5 pharma company in the Austrian market to number 2.

Gabi had been appointed to lead the CEE region in 2015 which over time included Poland, Romania, Hungary, Czech Rep., Slovakia and Ukraine. She has transformed the cluster from a volatile and unreliable contributor with credibility issues to a significant double-digit growth driver setting a new standard of working together in an integrated way as an agile ‘cluster of the future’. She developed together with the team a compelling vision with disproportionate investment on high opportunity markets and therapeutic areas while upgrading capabilities and competences to create a better and broader demonstration and understanding on the value of innovation with important decision makers and influencers. Gabi’s passion and drive towards gaining equal access for patients in the CEE countries and challenging the status quo, enabled not only numerous new reimbursements but also other access solutions like targeted patient programs.

Gabi has been elected as the first Chairwoman ever of the EFPIA (European Federation of Pharmaceutical Industries and Associations) CEE Task Force in April 2020 and introduced a new format for the task force work which defines and aligns to strategic priorities.

Building on all her previous engagement and dedication in working with stakeholders and decision makers, Gabi had been appointed Public Policy lead for the 31 countries of the Mid-Europe Region in May 2021. In this role, she is responsible for the strategy, positions and policy-focused plans for MSD key products and policy areas connecting national and regional stakeholders to build alliances and consensus around critical policy objectives. Gabi also leads the EUCAN Big Bang Task Force sub-group working on access and launch sequencing in Europe.

In parallel, Gabi continues to serve as Chair of the Supervisory Board of MSD Germany since 2016. For many years, she has been a member of the advisory board of ESB, a European Business School in Germany.

She also acts as Executive Ambassador at MSD for Mothers, is a Sponsor of the Women Network of MSD Poland, was a speaker in the MSD Women Leadership Program, and at internal and external events on Diversity & Inclusion and Women’s Leadership in Business.

Gabriele Grom, German nationality, holds a degree in pharmacy from the University of Tübingen, Germany and leading to certification as government licensed pharmacist. She lives in Vienna, Austria.