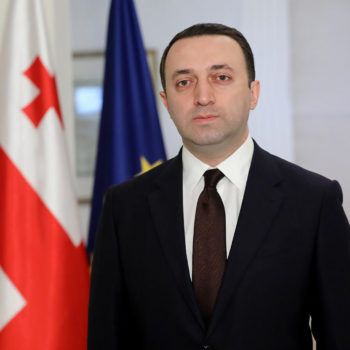 Irakli Garibashvili is a Georgian politician and the Prime Minister of Georgia since 2021. He previously served as Prime Minister from 2013 until his resignation in 2015 and is a former business executive. During his first term, he was the youngest person to assume the PM office in Georgia and the second youngest state leader in the world. Garibashvili entered Georgian politics in 2012 as a founding member of the Georgian Dream Party, which won in the parliamentary elections of 2012. He also served as Minister of Internal Affairs from 2012 to 2013, and as a Minister of Defense in 2019 to 2021.

In his different tenures and official posts, Garibashvili and his Government has initiated and implemented numerous constitutional, economic, electoral and judiciary reforms, and accelerated deepening of Georgia’s European and Euro-Atlantic integration process.  Back in 2014, Garibashvili signed the EU-Georgia Association Agreement, as well as Georgia’s application for European Union Membership in 2022. He also has launched a Peaceful Neighborhood Initiative, which aims at promotion of peace and stability in the South Caucasus region.

From 1999 to 2004 Garibashvili studied International Relations at Tbilisi State University (TSU). He also studied at the Pantheon-Sorbonne University in France from 2002 to 2004. Garibashvili is fluent in Georgian, English, French and Russian. He is married and has four children.