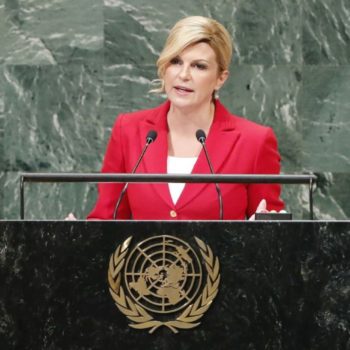 4TH PRESIDENT OF THE REPUBLIC OF CROATIA

Kolinda Grabar-Kitarovićis the 4th and1st female President of Croatia (2015-2020) with broad national and international experience in politics, diplomacy and security studies. During her career as an elected official and in national and international civil service, among other, she was elected a Member of the Croatian Parliament (2003), and served as Croatia’s first female Minister  of  Foreign  Affairs(2003-2008)andAmbassador  to  the  United  States,  Mexico, Panama  and the  Organisation  of  American  States  (2008-2011),  as  well  as  the  first  female Assistant Secretary General and member of the North Atlantic Treaty Organisation (NATO) Senior Leadership(2011-2014).She waselected an independentmember of the International Olympic Committeein 2020,and has  been  appointed  Chair  of  the  Future  Hosts  Commission  for  the  Games  of  the  Olympiad. Currently  she  is a Special  Advisor  to  the  Dean  of  the  Zagreb  School  of  Economics  and Management, andserves on the boards of a number of non-profit institutions, such as Friends of Europe, the US Atlantic Council, GLOBSEC, Halifax International Security Forum,Nizami Ganjavi  International  Center,  Concordia  Leadership  Council.  She isa Member  of  the  High-Level  Advisory Council  for  the  High  Representative  for  the  UNAlliance  of  Civilizations (UNAOC), the  Global  Ambassador  for  Immunization  for  Women  Political  Leaders  (WPL), and chair emerita of the Council of Women World Leaders.Parallel  to  her  diplomatic  and  political  careers,  she  has  pursued  an  academic  career  in government,  international  relations  and  security  studies  at  the  Vienna  Diplomatic  Academy(1994-1995), the George Washington University(2002-2003), Harvard University(2009), the Johns Hopkins University(2011),and the University of Zagreb. She holds a Master’s degree, and is currently writing a PhD thesis in the field of International Relations and Security Studies on the Responsibility to Protect. She is a recipient of the 2019 Fulbright Lifetime Achievementaward for her “remarkable contributions as a leader, diplomat, and public servant“, the George Washington University President’s medal, and  a  number  of  other  national  and  international awards, decorations, recognitions, honorary doctorates and honorary citizenships.