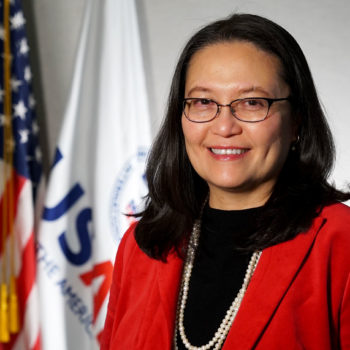 Lisa Magno is the Senior Deputy Assistant Administrator (SDAA) in the Bureau for Europe and Eurasia at USAID, starting August 2021.

Prior to joining the E&E Front Office, she served as USAID/Kosovo Mission Director from July 2018 – July 2021. She joined the Kosovo mission in October 2017 initially as the Deputy Mission Director.

Ms. Magno is a development professional with 30 years of experience working for USAID. She started her career as a local- hire contractor for USAID’s Mission to the Philippines where she was a technical officer responsible for overseeing local government and civil society programs. During her time at USAID/Philippines, she also managed regional programs in Cambodia, Laos, and Vietnam. The second phase of her career was spent in Latin America where her focus was on collaborating with USAID implementing partners in Honduras, Peru, and Bolivia.

She also spent time in Colombia as a contractor to the USAID mission, overseeing the transition program for displaced persons. Ms. Magno joined USAID’s Foreign Service in 2003. Her overseas Foreign Service assignments include Guatemala, Afghanistan, and Kosovo. In USAID/Washington, Ms. Magno also served as the Chief Strategic Planning officer in the Bureau of Asia and Middle East.

Keynote Remarks by the Director-General of World Health Organization