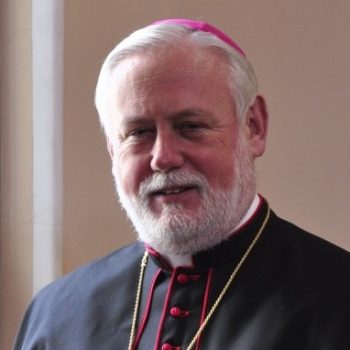 TITULAR ARCHBISHOP OF HODELM, SECRETARY FOR RELATIONS WITH STATES

Ordained a priest for the Archdiocese of Liverpool on 31 July 1977.

Having gained a doctorate in Canon Law, he entered the diplomatic service of the Holy See on 1 May 1984, serving in the Apostolic Nunciatures in Tanzania (1984-1988), Uruguay (1988-1991), the Philippines (1991-1995) and subsequently as an official of the Section for Relations with States of the Secretariat of State (1995-2000). On the 15 July 2000, he was appointed Special Envoy and Permanent Observer of the Holy See to the Council of Europe at Strasburg.

On 22 January 2004, he was appointed titular Archbishop of Hodelm and Apostolic Nuncio to Burundi, succeeding Archbishop Michael Aidan Courtney, who had been assassinated in an ambush on the 29 December 2003.

On 11 December 2012, he was appointed Apostolic Nuncio to Australia.

He was appointed to the post of Secretary for Relations with States on 8 November 2014.

War in Ukraine – A Call for Global Solidarity