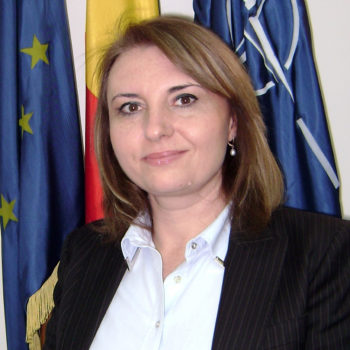 STATE SECRETARY AND CHIEF OF THE DEPARTMENT FOR DEFENSE POLICY, PLANNING AND INTERNATIONAL RELATIONS OF ROMANIA

Simona Cojocaru has been serving within the Romanian Ministry of National Defense for more than 20 years, currently holding the position of State Secretary and chief of the Department for Defense Policy, Planning and International Relations.

Previously she held a series of very important positions as Director of the Defense Policy Directorate from 2013-2015 and 2017-2019, and Director of the Cabinet of the Minister of National Defense, between 2015-2016. She has been awarded the Order of the Star of Romania in rank of Knight (2021), Order of Merit in rank of Knight (2016), The Merit Emblem “In the service of the Romanian Armed Forces”, 3rd class (2014) and the “Honor of the Romanian Military” emblem (2014). She is also a recipient of the National Order of Merit of the French Republic in the rank of Knight (2022)

Simona Cojocaru holds a degree in economics, graduating the Faculty of International Economic Relations within the Academy of Economic Studies in Bucharest, and a master’s degree in International Relations and European Integration at the National School of Political and Administrative Studies, Bucharest. She has completed multiple courses of international relations training at renowned schools abroad, such as the High Level Course at the European Security and Defense College, JFK Government School – “Senior Executives in International Security” Program, Royal Military College, Shrivenham, UK – “European Security”; France – “Personalité d’avenir défense” program, organized by the French Ministry of Defense; USA – “Challenges of US foreign policy. European Regional Project” – International Visitor Leadership Program, organized by the US State Department.

Prepared for All Situations: Future of Multi-Domain Operations