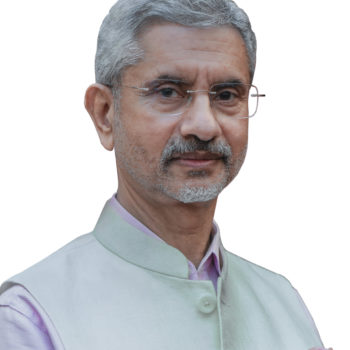 Minister for External Affairs of the Republic of India

Dr. S. Jaishankar is Minister for External Affairs of the Republic of India since May 30th, 2019. He is a Member of the Upper House (Rajya Sabha) of India’s Parliament from the state of Gujarat.

He has also served in other diplomatic assignments in Embassies in Moscow, Colombo, Budapest and Tokyo, as well in the Ministry of External Affairs and the President’s Secretariat. He was also President – Global Corporate Affairs at Tata Sons Private Limited from May 2018.

Dr S. Jaishankar is a graduate of St. Stephen’s College at the University of Delhi. He has a Masters in Political Science and an M. Phil and Ph.D in International Relations from Jawaharlal Nehru University, Delhi.

He is a recipient of the Padma Shri award in 2019 and has written a widely acclaimed best-selling book: The India Way: Strategies for an Uncertain World, which was published in 2020.