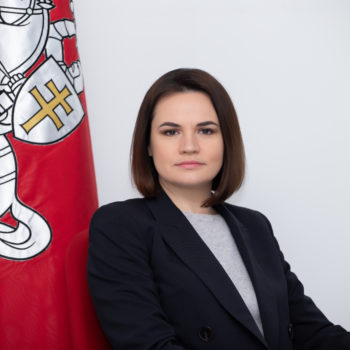 Leader of the Belarusian democratic forces

Sviatlana Tsikhanouskaya is the leader of the Belarusian democratic forces who independent observers agree won the presidential election on August 9, 2020, against the autocratic President Aliaksandr Lukashenka. As the leader of the Belarusian democratic movement, she has visited 26 countries, gathering support and advocating for the release of 1000+ political prisoners and a peaceful transition of power through free and fair elections.  In meetings with President Biden, Chancellor Merkel, President Macron, President von der Leyen, and other world leaders, Tsikhanouskaya emphasized the need for a braver response to the actions of the Belarusian dictatorship.

In 2020–2022, Sviatlana Tsikhanouskaya became a symbol of the peaceful struggle for democracy and strong female leadership. Among dozens of distinctions, she is a recipient of the Sakharov Prize awarded by the European Parliament, 2022 International Four Freedoms Award, and Charlemagne Prize. In 2021 and 2022, she was nominated for the Nobel Peace Prize by Lithuanian President Gitanas Nauseda and Members of the Norwegian Parliament respectively.