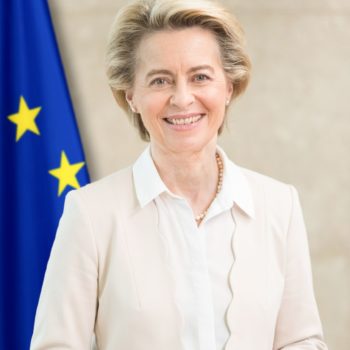 PRESIDENT OF THE EUROPEAN COMMISSION

“Ursula von der Leyen, Dr., born in 1958, was a member of the German Bundestag from 2009 to 2019 and a Federal Minister in Germany for more than 14 years, responsible for Family Affairs (2005-2009), then for Labour and Social Affairs (2009-2013) and later for Defence (2013-2019). She completed her medical studies with a state examination and licence to practise medicine in 1987, followed by a doctorate in 1991 and a Master of Public Health in 2001. She has been a member of the CDU since 1990. From 2003 to 2005, she was a member of the CDU Parliamentary Group in the Lower Saxony State Parliament. In 2019, she was elected President of the European Commission. As the head of the European executive, she has defined six headline ambitions for Europe for her mandate: a European Green Deal, a Europe fit for the digital age, an economy that works for people, a stronger Europe in the world, promoting our European way of life, and a new push for European democracy.”

Through Hardship to the Stars: Europe and the Reconstruction of Ukraine