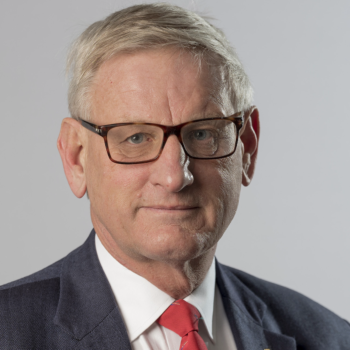 FORMER PRIME MINISTER AND MINISTER OF FOREIGN AFFAIRS OF SWEDEN

Carl Bildt is Co-Chair of the European Council on Foreign Relations, contributing columnist to Washington Post as well as columnist for Project Syndicate. He serves as Senior Advisor to the Wallenberg Foundations in Sweden and is on the Board of Trustees of the RAND Corporation in the US. He has served as both Prime Minister and ForeignMinister of Sweden. March 2021, Mr Carl Bildt was appointed WHO Special Envoy for the Access to COVID-19 Tools Accelerator (ACT-Accelerator). Subsequently he served in international functions with the EU and UN, primarily related to the conflicts in the Balkans. He was Co-Chairman of the Dayton peace talks on Bosnia and become the first High Representative in the country. Later, he was the Special Envoy of UN Secretary General Kofi Annan to the region.