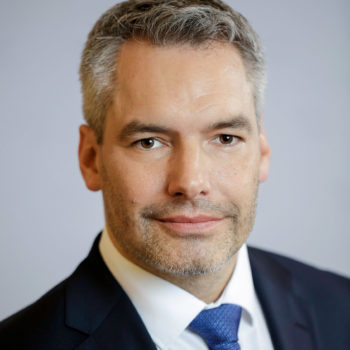 FEDERAL CHANCELLOR OF THE REPUBLIC OF AUSTRIA

Karl Nehammerassumed office as Federal Chancellor of the Republic of Austria in December 2021 after serving as Federal Minister of the Interior from 2020 onwards. Prior to this, Chancellor Nehammer acted as Spokesperson for Integration and Migration of the new People’s Party Group in the Austrian Parliament and Secretary General of the new People‘s Party, both from 2018 to 2020 after becoming a member of the Austrian National Council in 2017. He has held several leadership positions in the Austrian Workers’ and Employees’ Association (ÖAAB; Secretary General 2016-2018, Deputy Secretary General 2015-2016, Regional Chairman of the Vienna Section since 2016). At the Austrian People’s Party, Chancellor Nehammer was recently elected as Party Leader and served as Head of the Municipal Affairs Department in Lower Austria from 2013 to 2015, as Head of Training and Networking at the Political Academy from 2008-2009 and as Head of the Service and Mobilisation Department from 2007 to 2008. Currently, he still holds the position of District Chairman for Vienna’s Hietzing district since 2017. During his career in the private sector, Chancellor Nehammer was Managing Director of Academy 2.1 from 2009 to 2013and is a strategic communication, public speaking and communication skills coach since 1999. From 1993 to 1996, Chancellor Nehammer was a professional soldier, completedtheextended compulsory service (one year on a voluntary basis) and subsequently continued to serve in the Austrian Armed Forces.Chancellor Nehammer holds a degreein Political Communication from Danube University Krems and received training as communication coach at the Managementinstitut der Industrie on behalf of the Federal Ministry of Defence, Vienna. After his extended compulsory military service, Chancellor Nehammer was trained as infantry officer and information officer.