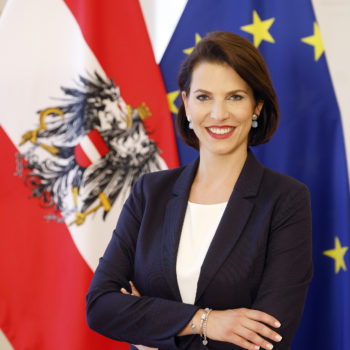 Karoline Edtstadler was appointed Federal Minister for the EU and Constitution at the Federal Chancellery under Kurz II by President Alexander Van der Bellen in January 2020. Previously, from July 2019 to January 2020, she was Member of European Parliament and Head of Delegation of the Austrian People’s Party (ÖVP) after serving as secretary of state at the Federal Ministry of the Interior under Kurz I from 2017 to May 2019.Having read law at the Paris Lodron University of Salzburg from 1999 to 2004, Ms Edtstadler has extensive legal experience serving as judge at the Salzburg Regional Court from 2008 to 2011 and working at the Federal Ministry of Justice from 2011 to 2016, lastly as an adviser in the cabinet of the Federal Minister for Justice, Wolfgang Brandstetter. Ms Edtstadler was also posted to the European Court of Human Rights (ECHR) in Strasbourg as a legal expert from 2016 to 2017.